Adidas vs Nike: Which brand produced the best kit for the 2020/2021 season

Senior Minister Yaw Osafo Maafo has noted that the use of technology to conduct business both in the private and public sectors, has come...
Read more
Business

President Nana Addo Dankwa Akufo-Addo has cut the sod for work to commence on the 83.5-kilometre standard gauge railway line from Kumasi to Obuasi, as part...
Read more
News

A member of the Communications Team of the New Patriotic Party, Nana Akomea has dismissed suggestions that secessionist groups in the Volta region are...
Read more

Ahead of each season, football clubs release their new kits for fans to savor.

For the 2020/2021, fans have seen Liverpool’s long-awaited Nike, Juventus’ black and white with dazzling gold detailing, Chelsea’s sporadic misfortunes with the use of the number three.

Some clubs have had disappointing templates, while others are overhyped but amid all the designs the two brands, Nike and Adidas have produced some incredible kits.

Below are the top ten jerseys you must buy if you are a fan of jerseys. Wrap your retinas around these mesmerizing pieces of arts in football fashion. 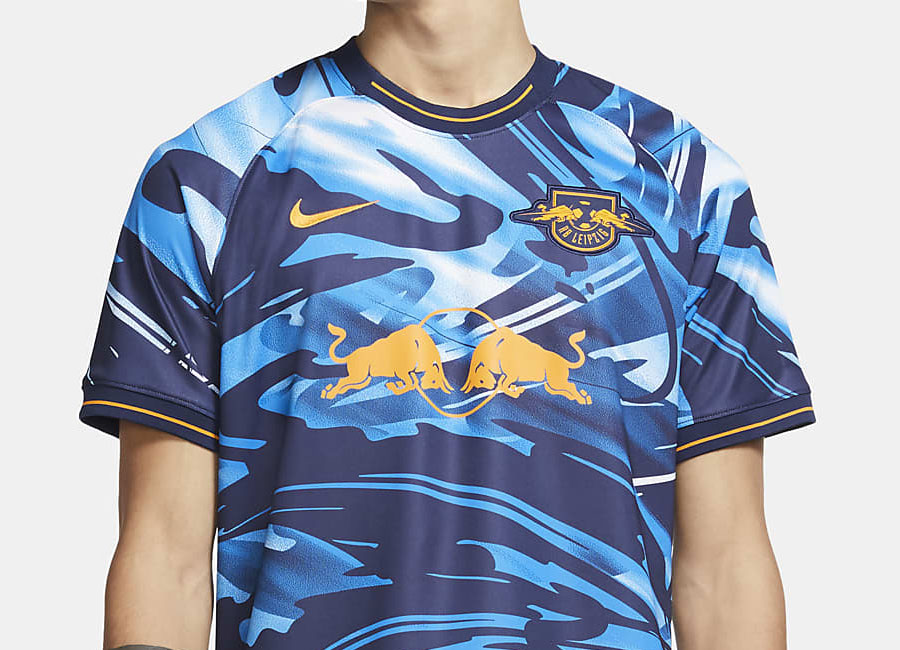 The kit is part of a wider Nike collection that celebrates the jersey culture of the 1990s and the iconic Air Max shoe archives.

The third kit features a bespoke all-over swirling graphic created by heavily distorting an image of the club crest. Various shades of blue merge with white to form a unique aesthetic inspired by a popular colorway of the Nike Air Max 98.

All three kits of the Catalan giants are incredible but what stands out is the second kit.

Nike unveiled the club’s second kit for the season and it goes back to the colour black and also a touch of gold.

Barca’s new heat for the road is inspired by the electric atmosphere of Barcelona by night, where the avenues of the city come alive. 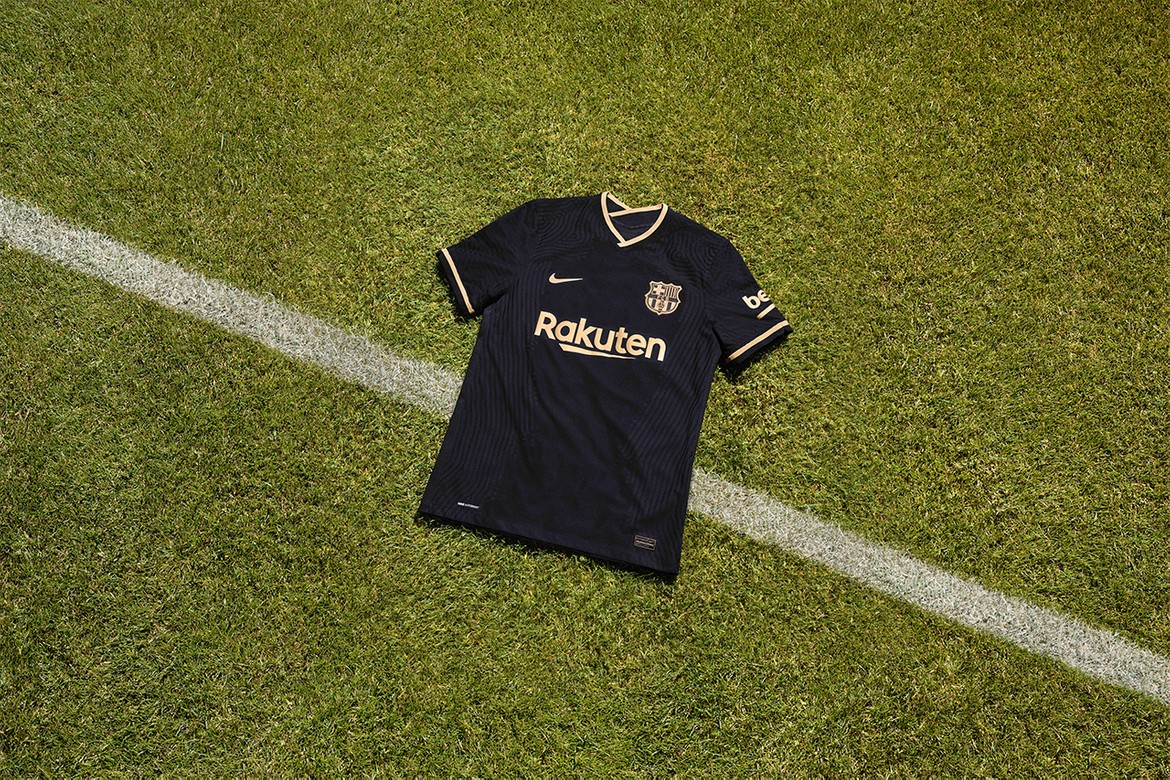 A golden Nike Swoosh, club crest, and sponsor’s logo light up the front of the jersey, with the embroidered crest and Swoosh standing out thanks to an elevated trim.

Two-tone gold and black V-neck collar, custom rib trim on the sleeves, and Nike’s VaporKnit detailing complete the hard new kit. The 2020-21 FC Barcelona away kit is available now from nike.com. Get a closer look at Barca’s new 20-21 away shirts below.

The nostalgia in Inter’s new third kit is enough to capture your attention if you are a football lover.

You will even love it more if you are a fashion enthusiast because of the colours of the kit. 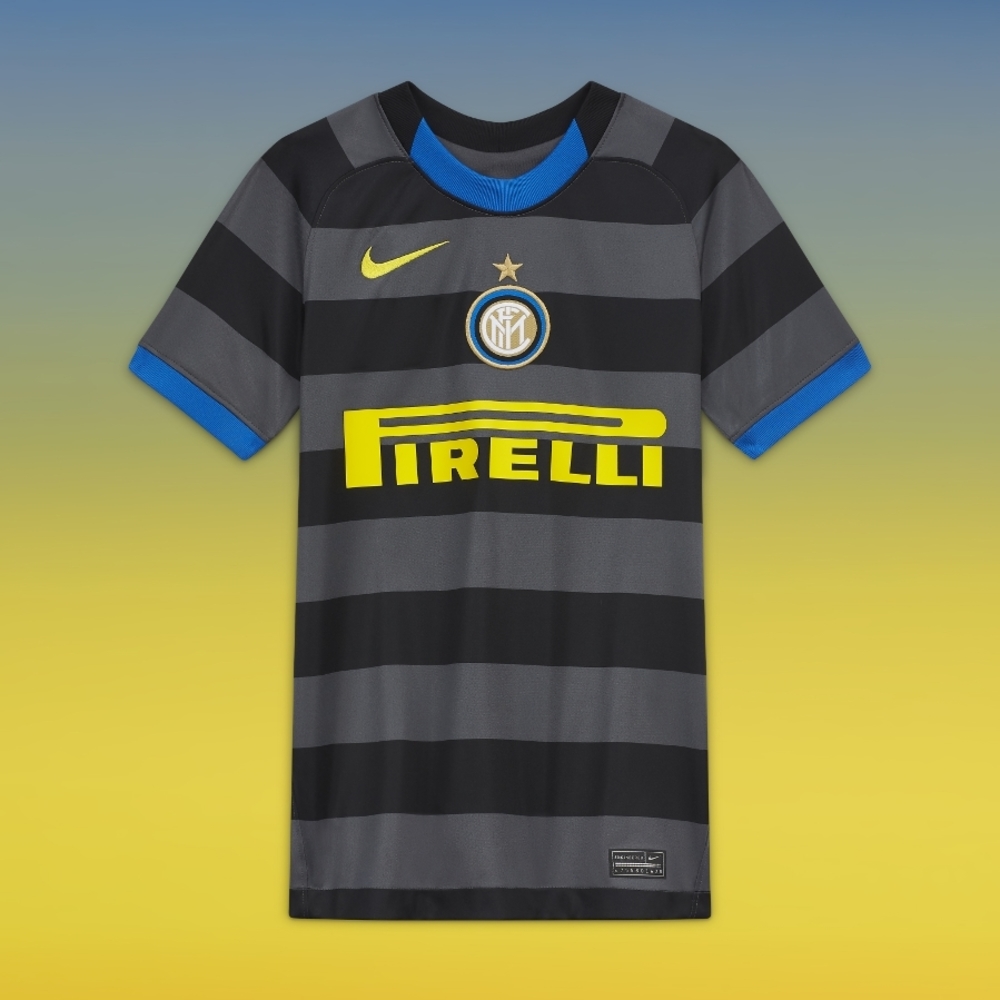 The jersey is both steeped in culture and the stylishness of the city of Milan, a fashion crazy metropolis.

Inter will wear horizontal black and silver stripes as part of a kit and overall 2020-21 collection that more than befits its place as Europe’s place of fashion.

Chelsea’s new second kit is impressive and very different from previous away kits.

After a change in sponsorship, the Blues now have a huge ‘3’ in front of their kit after signing a new partnership with the telecommunication company.

The kit features in an ‘arctic blue’ tint, which is a relatively pale shade, while the Three logo is in a ‘blackened blue’. 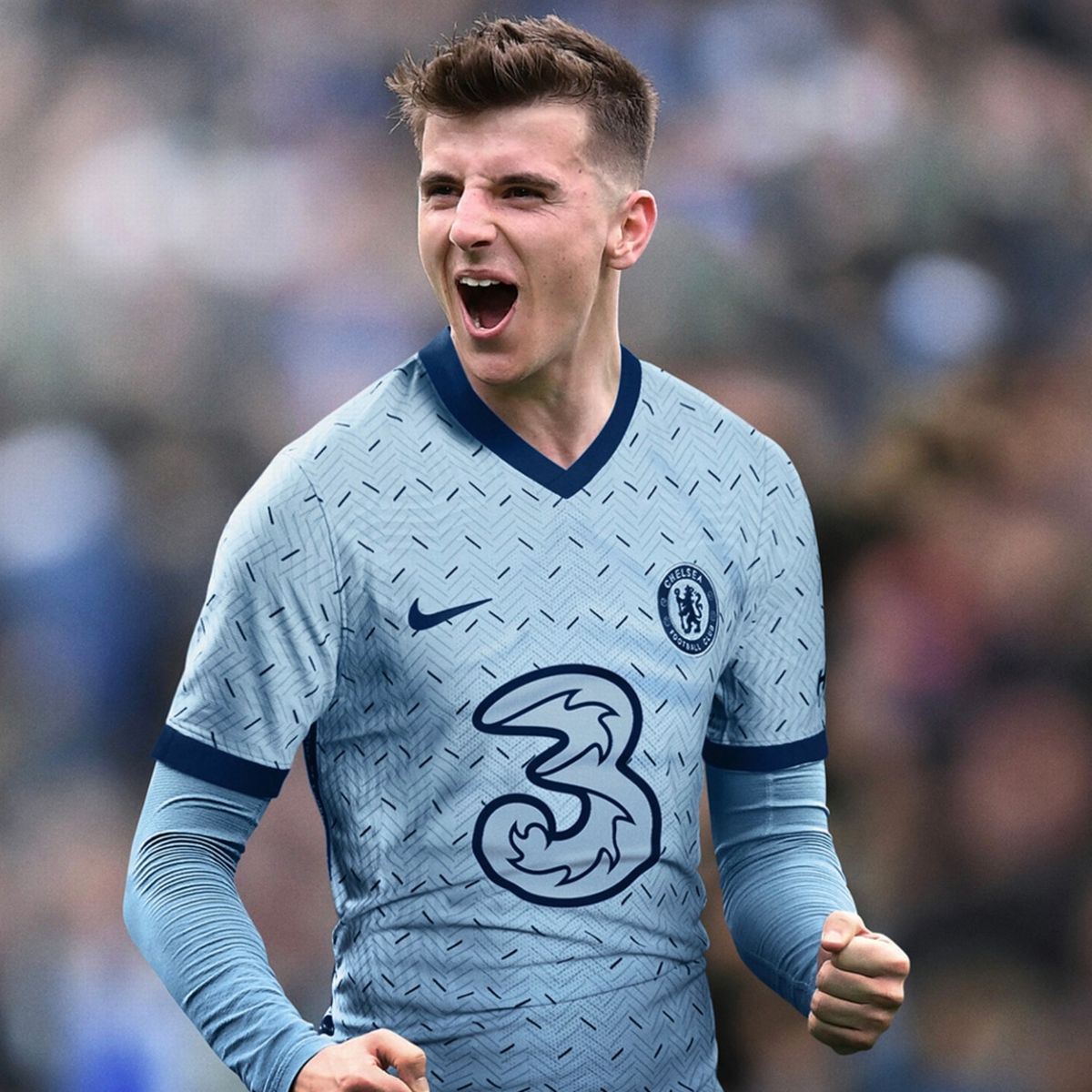 The Arctic blue design said to have a “millennial swagger” which mirrors that of an exciting young squad in west London.

“Arctic blue provides a tasteful base colour for the jersey, with darker shades making up a disrupted herringbone knit which covers the front and back of the shirt to create a compelling aesthetic.

“A monochromatic club crest filled with a micro-herringbone pattern sits on the chest, alongside a dark blue Nike Swoosh.

“A dark blue V-neck collar and trim on the sleeves frame the design, while dark blue tape featuring the phrase, ‘The Pride of London’, runs down the sides of the torso. Arctic blue shorts and dark blue socks complete the head-to-toe look, with a Swoosh and a Chelsea lion placed midway up the shin.”

The Blues, in partnership with kit suppliers Nike, have sought to come up with a design that they believe reflects what the club and its vision for the future are all about.

The Nike AS Roma 2020-2021 away shirt is predominantly ‘pale ivory’, featuring a black-and-red Lupetto badge on the left chest.

The collar of the Nike AS Roma 2020-21 away football shirt is traditional and has a maroon main color with yellow and red piping – this looks is inspired by early 80s Roma change shirts.

More dark red is present in the form of the cuffs and side stripes of the Nike Roma 2020-2021 away shirt. 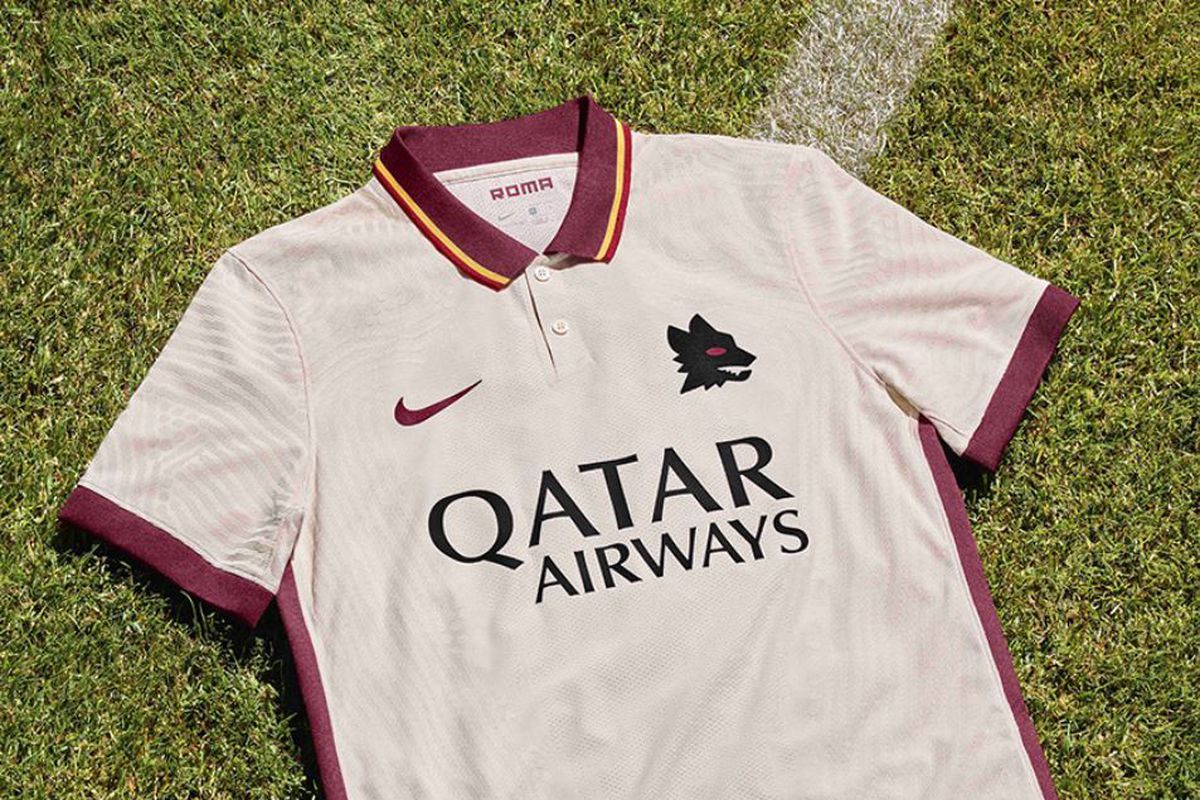 This is the new Ajax away kit 20/21, the new alternate uniform for the upcoming Eredivisie season for Dutch giants Ajax Amsterdam. Made by Adidas, the new Ajax alternate jersey was officially unveiled on 11 June 2020. The team was first in the Dutch top flight before the league was curtailed due to Covid-19.

The jersey is predominantly blue, with modern interpretations of several graphic designs that were popular in the 1980s and 90’s present on it. The three colours of the Dutch flag (red, white, and blue) can be subtly seen across the entire kit. The striped graphic design extends to the back, which also has the 3 Andreas crosses in white. 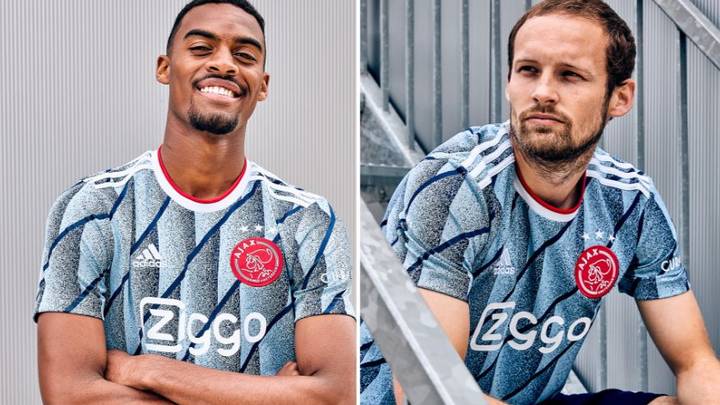 The Ziggo (shirt sponsor) and Adidas logos are in white, while the player numbers will be in red. Predominantly blue shorts and socks (with a hint of white) complete the new Ajax away kit for 2020-2021, as can be seen in the pics below. 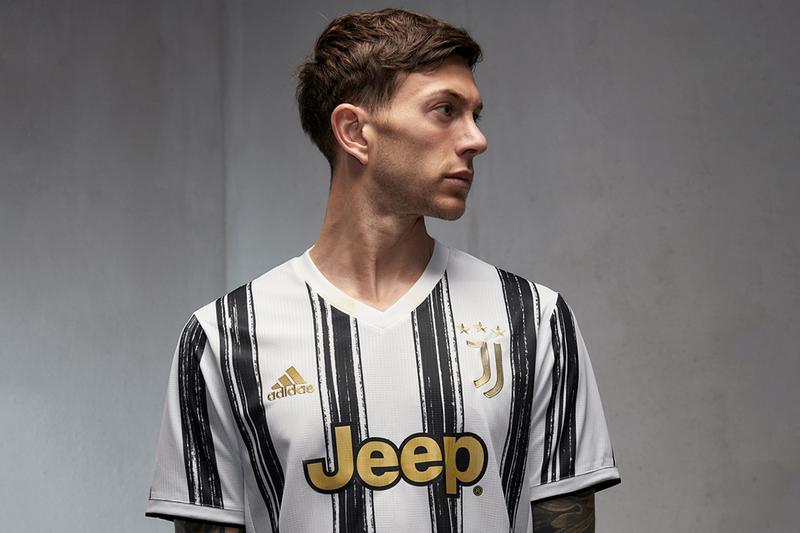 Predominantly white, the new Juventus 2020-2021 home jersey features four black brushstroke stripes on the front and sleeves – the back is all-white.

The logos on Juventus FC’s 2020-21 home jersey are golden. In terms of a template, the new Juventus jersey is based on the one used for the Germany 2020 home shirt with the main difference being the use of a v-collar instead of a crew-neck.

Based on the new Serie A global font, the numbers and names on the back of the Juventus 20-21 home shirts are black. Both feature a custom pattern on the inside, exclusive to Juventus.

The Red Devils unveiled their new away kit for the upcoming on August 15, 2020.

Adidas consider the shirt to be “legend earth green” and to boast “intricately hand-drawn and painted design”.

The dark colour palette contrasts with clean white accents to offer a versatile and contemporary look, designed with the club’s famous away supporters in mind. 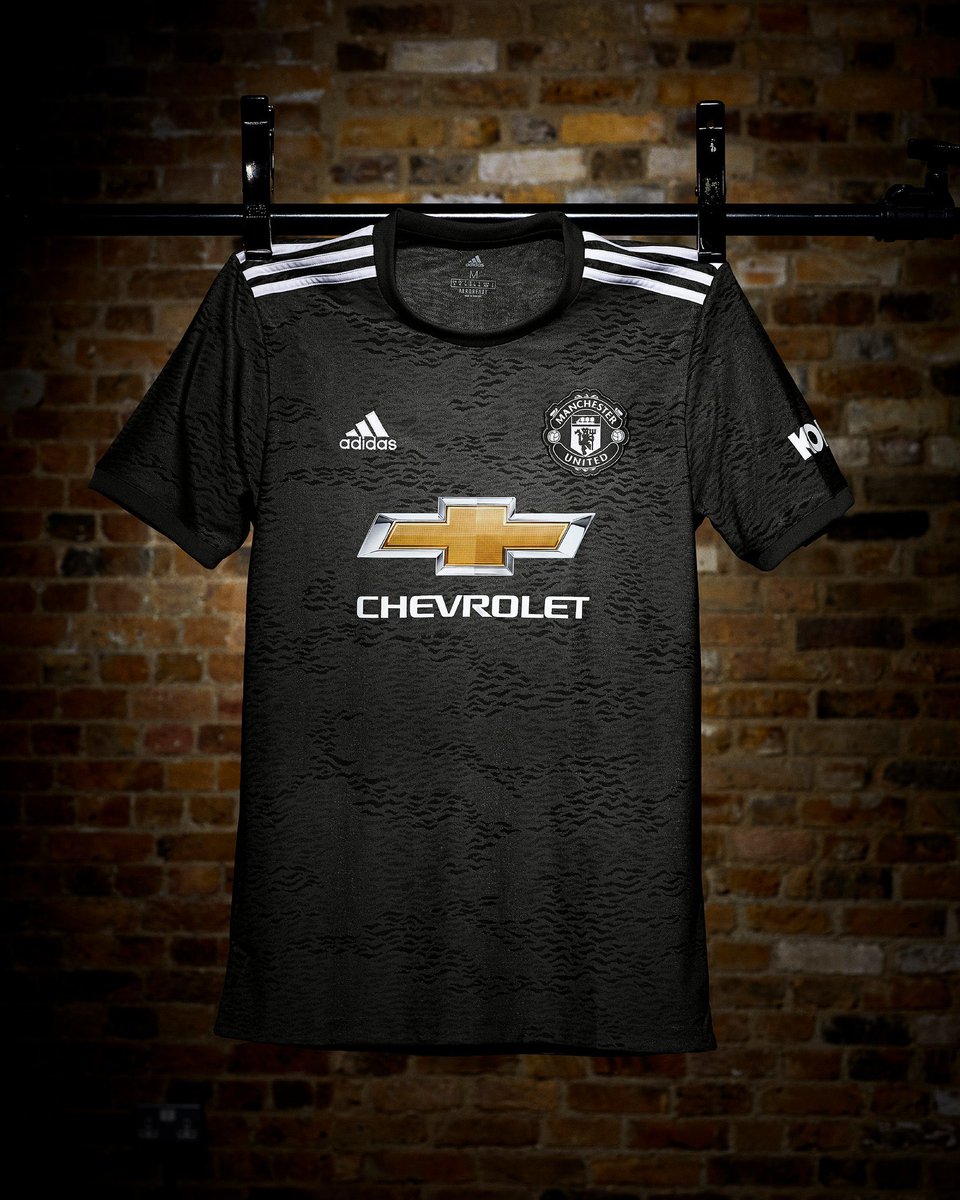 The kit has already been worn by the club in last season’s Europa League where they got eliminated in the semi-finals of the competition.

Bayern Munich’s third seasonal kit is one befitting of champions.

The black-based shirt features the Adidas, Deutsche Telekom, and monochrome crest in white colour. The same colour goes to the three stripes on each side of the shoulders.

The highlight of the kit though is the ‘vintage-inspired’ Rauten graphic that appears red, bearing similarity with the team’s ‘digital’ fourth kit in FIFA 18.

The body has a diagonal multi-diamond pattern that is bright red on the centre and is faded, almost translucent like on the sides. 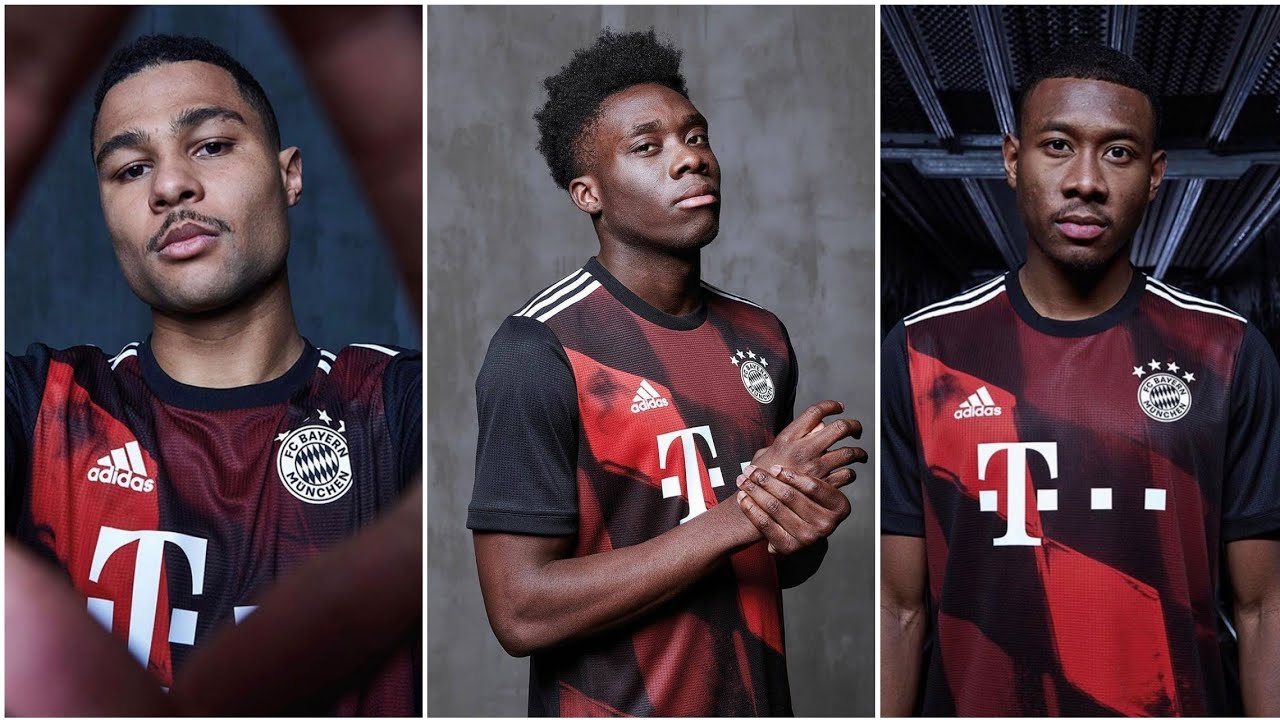 The Allianz Arena’s outer shell serves as the inspiration for the hand-painted, glowing red diamond. A white MIA SAN MIA signoff appears below the round collar at the clear backside of the shirt. Black shorts and socks complete the 20-21 third kit.

The Gunners’ new third kit can be added to a perfect collection of awesome away jerseys that the club takes pride in over the years.

The new Adidas away jersey aims at uniting generations of fans with Highbury’s iconic marble halls the reference point.

Drawing inspiration from the patterns, colours, and motifs found amongst the iconic East Stand of Highbury, the away jersey is a literal reference of the marble within it and the podium upon which the statue of iconic former manager, Herbert Chapman rests. 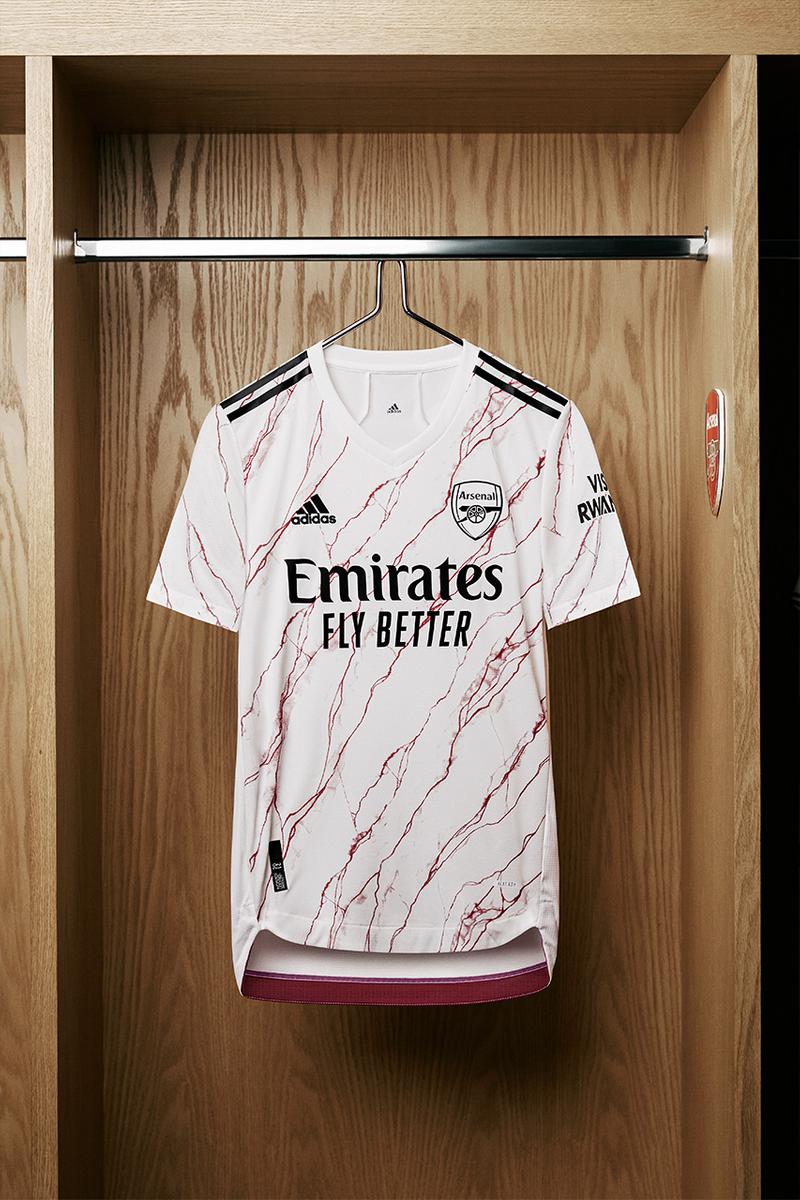 Whilst retaining a clean and versatile aesthetic, the shirt has a bespoke, hand-drawn design that uses the colours off white, maroon, and black – and the natural pattern of the marble – to represent the details of the marble halls that saw Arsenal lift the league title thirteen times.

Images have been published online of Ghana’s away jersey made by Puma for the 2020/2021 international football season. FootyHeadlines, noted for their publication of official...
Read more
Sports

Ghana has lined up a friendly against Qatar on Monday, October 12, in Antalya, Turkey. The 2022 World Cup host, comes in to replace Equatorial...
Read more
Sports

Less than 24 hours after images of Ghana’s new  away jersey leaked on the internet, photos of the home jersey have also emerged. FootyHeadlines, noted...
Read more

Senior Minister Yaw Osafo Maafo has noted that the use of technology to conduct business both in the private and public sectors, has come...
Read more
Business

President Nana Addo Dankwa Akufo-Addo has cut the sod for work to commence on the 83.5-kilometre standard gauge railway line from Kumasi to Obuasi, as part...
Read more
News

A member of the Communications Team of the New Patriotic Party, Nana Akomea has dismissed suggestions that secessionist groups in the Volta region are...
Read more
News

The Ghana Police Service has cautioned Political Parties to desist from shielding electoral offenders before, during and after the December 7 Presidential and Parliamentary...
Read more

© Ghbreakingnews.com. All rights reserved. Your trusted online source for breaking news in Ghana and beyond!

Senior Minister Yaw Osafo Maafo has noted that the use of technology to conduct business both in the private and public sectors, has come...
Read more
MORE STORIES

EllSamwise King - October 1, 2020 0
Award-winning musician, Becca, has warmed the hearts of many Ghanaians with her appearance on Cable News Network (CNN). Posting the video, she captioned “Ghana to the...

Use of technology in doing business has come to stay –...

EllSamwise King - October 1, 2020 0
Senior Minister Yaw Osafo Maafo has noted that the use of technology to conduct business both in the private and public sectors, has come...

EllSamwise King - October 1, 2020 0
President Nana Addo Dankwa Akufo-Addo has cut the sod for work to commence on the 83.5-kilometre standard gauge railway line from Kumasi to Obuasi, as part...

EllSamwise King - October 1, 2020 0
A member of the Communications Team of the New Patriotic Party, Nana Akomea has dismissed suggestions that secessionist groups in the Volta region are...